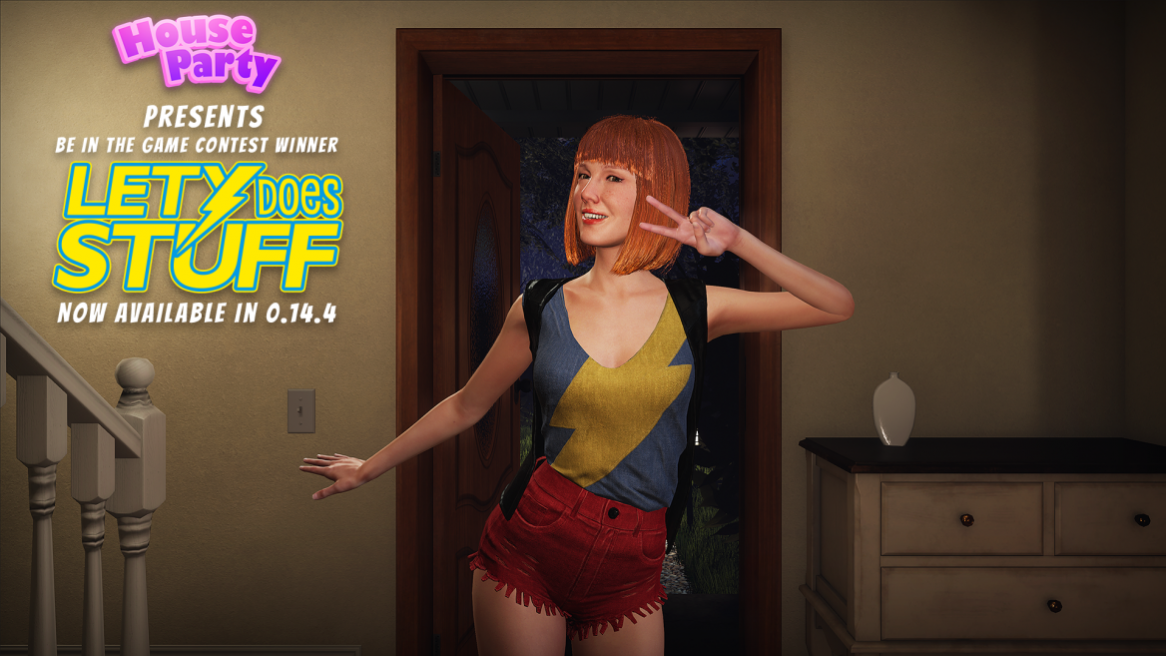 Eek! Games released the 0.14.4 early access version of House Party, a sexually charged 3D point-and-click comedic adventure, giving players a choice to party the way they want. The games community has embraced House Party as an intelligent, funny and challenging sexy PC sim-like game with their steam fans supporting the game giving it a very positive approval rating, and their most recent reviews reaching over 93%. A new trailer will be revealed next week in addition to more news, so stay tuned!

Excited about their latest update, the team over at Eek! Games decided to participate in the current week-long sale on steam. The sale gives new fans a chance to grab the game at a 30% OFF deal. The latest update centered around LetyDoesStuff, who was the winner of their recent “Be in the Game” contest along with Game Grumps. The team worked really closely with Lety to tell an awesome, fully-fleshed story that adds a load of new content.

Check out LetyDoesStuff ‘dressed as herself’ at this year’s San Diego Comicon:

“Expect hundreds and hundreds of new dialogues split between 10 characters, several new interactive items, a UI redesign (that looks sharp as shit), and new animations–both in and out of the bedroom.

One other awesome addition to this update is that saves between versions of House Party will no longer be deleted, meaning you can load and continue your previous playthroughs. However, for the most stable experience, and to gain future Steam Achievements, a new save is still recommended.

For a full list of changes and additions, check out the changelog here. If you’ve got questions or feedback, you can find us at the usual spots–Discord[discord.gg], Official Forum[forum.eekllc.com], or Steam boards!

You can find the House Party game on Steam, at https://store.steampowered.com/agecheck/app/611790/

Eek! Games is founded by programmer Bobby Ricci in 2015 with “House Party” as its first release. In 2017 House Party launched on Steam as an Early Access game. Even though it was still very premature, the initial reception was surprising and the community built quickly. The game sold over 30,000 copies in its first few weeks and over 300,000 in its first year alone. Learn more at http://www.houseparty.games