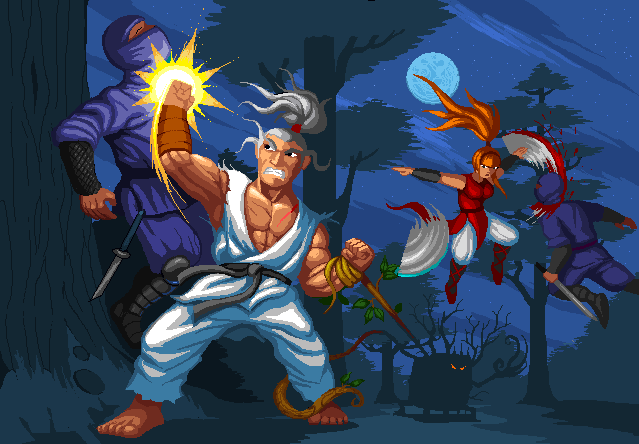 Okinawa Rush, is a fast flowing martial-arts platform game featuring RPG elements, with many items and weapons to collect, in addition to a “parry-anything” engine and a unique “FengShui” system.

Okinawa Rush is an intense and uniquely fluid beat-em-up, 2D side scrolling fighting game, inspired by the by the retro 16-bit era with its classic late 80’s, 90’s arcade style design and gameplay experience. If you enjoyed playing them back then and currently still enjoy retro games like FirstSamurai, Street Fighter 2, Tekken, or Mortal Kombat, and want to relive that experience and more in Okinawa by battling enemies, avoiding traps, fighting bosses, discovering secrets, collecting loot and saving hostages, then this game will surely enthrall you. The game was Greenlit on steam back in May 2017 and will air on Kickstarter at 6 a.m. PDT next Monday August 14, 2017.

“Okinawa Rush is a brilliant side scrolling platform fighting game. It has a wide variety of moves which are a lot like versus fighting games such as Street Fighter 2. The combat is extremely satisfying and meaty. It controls very well and the art style is beautiful.” – JimPlaysGames on Youtube

A tale of power, greed, sorrow and vengeance… A ruthless army of ninja known as the ‘Black Mantis’ clan has come to Okinawa to loot, pillage and kill anyone that gets in their way. Above all else, they are searching for the legendary training scroll of Hiro Yashima who has honed his martial skill to a supernatural level, summoning flame and sound to vanquish his foes. He returns home one night to find his children missing, his wife slain, and a note in her bloody hand.

During a recent interview with GOPublix Game Media Relations, David Miller, the Lead Designer for Okinawa Rush was asked what inspired the story for the game he said, “Probably the biggest inspiration for the story of OkinawaRush is from the movie Shogun Assassin which was based on a series of comics called Lone Wolf and Cub. It’s a tragic and gory revenge movie about a master swordsman and his 4-year-old son who are relentlessly being hunted by the Shogun’s army and assassins. Fun fact: In the movie Kill Bill, Beatrix and her daughter watched Shogun Assassin together…” Read the full interview here to learn more about the making of Okinawa Rush.

The core of Okinawa Rush is fast, intense combat with a unique “parry everything” system – you can block projectiles, smash traps and parry every boss attack if you time the input correctly! Doing so increases your “rage bar” which can be used to unleash a fearsome “kia stomp”, which destroys everything around the player; including, sometimes the ground and scenery – opening up hidden areas. There is an “edit dojo” feature, where you can create your own training room and furnish it with ornaments bought or found within the main game. Placing the items in certain patterns will unlock “feng shui” bonuses which increase your stats beyond their natural potential. We have included several mini-games in which the player can train their character, including a karate kata area stylized in a dance rhythm game.

(preview mode, but you are free to use now in a mention because the link will auto convert to the live Kickstarter launch 6 am Pacific Daylight Time on Aug 14, 2017)

About the Development Studio

Sokaikan is a small, indie-game developer team based in the UK with big plans to develop pixel-art style games and apps for PC and mobile devices. Our objective is to create accessible and fun games inspired by the arcades from the early 90’s and the home consoles from that period too. Everything we create is unique – no preset engines or “borrowed” graphics. Visit us on the web here: www.okrush.co.uk/sokaikan Twitter: https://twitter.com/okinawarush Facebook: https://www.facebook.com/okinawarush